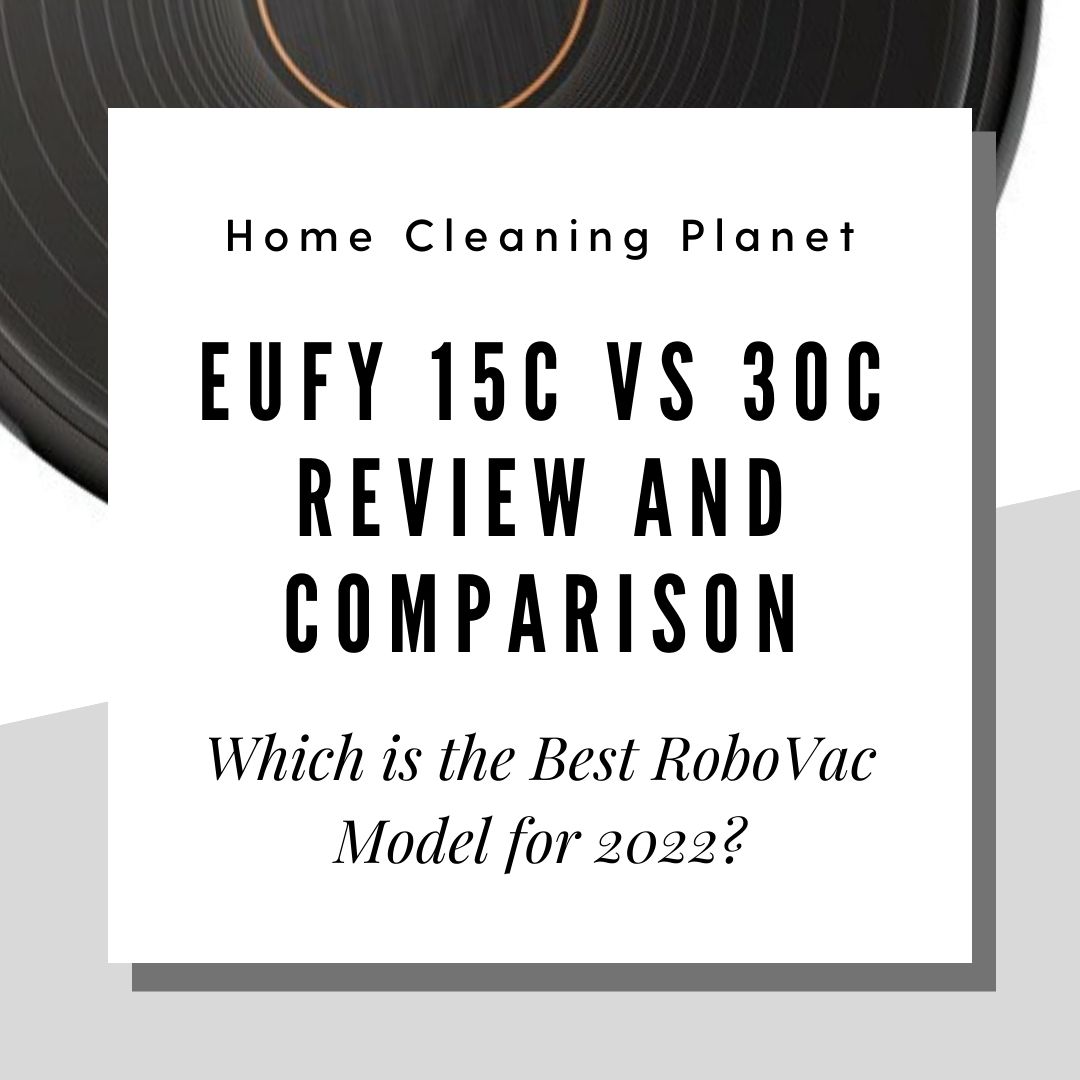 This page may contain affiliate links. When you click our links and take action, we get a small comission at no cost to you. Read here for more info

Choosing between Eufy 15c vs 30c is a tough choice. Both of these robot vacuums are widely regarded as top-tier models. However, there are a few different capabilities for each model that will make it easier to choose the right Eufy robovac for your needs.

Anker Innovations as a company has a subsidiary called Eufy, which primarily specializes in creating smart appliances with voice controls. These are incredibly common amongst their RoboVacs; however, not all of them have it. And, these RoboVacs are generally smart enough to clean without your hands-on attention. Just sit back, and wait for it to finish!

In this article, we will discuss some more differences and similarities between Eufy 15c vs 30c. The Eufy 30c comes around $30-$50 more, so it’s best to consider all factors and features before picking which one would be the best for your budget and lifestyle.

Suction power is basically indicative of how much the vacuum can clean at once. It’s also related to the RoboVac’s capability to suck in the smallest particles since the ones with lower power won’t be able to detect very thin or very minuscule dust.

So, starting with the Eufy 15c which has a suction power of 1300Pa, this RoboVac has a pretty average suction power that can handle most of the particles. It’s not ideal for cleaning loose fur or tinier dust particles since it won’t be able to suck those in at 1300Pa. You would need to manually clean it on your own.

Eufy 30c, on the other hand, is more powerful at 1500Pa. The 200Pa is actually a considerable difference as the Eufy 30c is much more efficient at cleaning dust and fur than the Eufy 15c. This also entails that it can clean much faster with higher suction power, so you wouldn’t have to wait long. Clearly, the Eufy 30c takes the win for this section.

Setting boundaries for your furniture is incredibly important when using smart appliances since a lot may be fragile depending on material and shape. The RoboVacs can quite easily damage these with scratches and heat, so you really have to be careful when using these.

Thus, the Eufy 30c came with a boundary detection feature that helps you keep parts of your house off-limits. In a way, these RoboVacs can’t access those places at all, which is great for naturally safe and messy places like kids’ playrooms and pets’ areas.

This also makes it safer for pets to live in your home since they wouldn’t have a RoboVac disturbing their sleep or beds. Just mark them as “no clean zones” in Eufy’s terms, and add the 13’ boundary strips along the perimeter of the area that tells the Eufy 30c’s sensors that the area is off-limits.

Considering that the Eufy 15c doesn’t come with this option, you really have to think if you need the feature at all. To us, it’s definitely worth the $30-$50 difference, but you might not need it at all without kids or pets. Still, the Eufy 30c takes this win.

Washable filters allow you to just clean them with your laundry without much-added hassle, which can decrease your costs over time. You wouldn’t have to buy new ones whenever the filters come out too dirty or used. The Eufy 30c’s filters are like this: you can handwash them whenever you want. The Eufy 15c, however, does not.

Still, the efficiency between both types of filters amongst these RoboVacs also differs. The Eufy 15 has a generally better filter as it has a high-efficiency particulate air filter that can clean 99.97% of particles. The Eufy 30c lacks this. So, if you want a RoboVac that can clean more dust, definitely go for the Eufy 15c.

Most of Eufy’s RoboVacs come with remote controls that allow you to control where your RoboVacs are going. Usually, people don’t really use this much since the vacuums are autonomous and have their own sensors, but you might want to just clean specific parts of the floor.

The Eufy 30c comes with this feature. You can just move it using the remote control that comes with the package, but Eufy 15c can take it a step further. It has a wifi connection that allows you to connect the RoboVac with the app, and it also supports voice prompts through Alexa and Google Assistant.

You can easily voice control the Eufy 15c around without any effort at all, which is what makes navigation for the Eufy 15c much better than Eufy 30c’s.

A lot of parents are hesitant to buy RoboVacs in fear that their children or even pets might get harmed, but these are incredibly safe to use as they have sensors that can detect moving objects. They can just swerve the other direction if there’s someone near them.

All things considered, the Eufy 30c has better suction power and safety features, but the Eufy 15c still takes our pick as it’s a generally more efficient RoboVac with its filters and voice prompts.

What Are the Main Differences Between Eufy 15c vs 30c?

The most considerable difference between the two is their navigation control systems as the Eufy 15c can work with wifi and can be controlled via app and voice prompts. The Eufy 30c can only work with remote controls.

There isn’t much difference, but if you nitpick the noise in terms of decibels, the Eufy 30c produces more noise at 68.4 decibels since it has higher suction power. The Eufy 15c, however, is more silent at 55c.

To provide a final verdict on Eufy 15c vs 30c, we think the Eufy 15c provides better value. Both vacuums obviously come with different features, and considering we only talked about the four main differences, both can stand on their own as they came out equally (2 wins each). But, if we’re going to consider the overall convenience and efficiency, the Eufy 15c still takes the crown since its efficient filters can make up for its weaker suction power, and the added voice prompt truly will make the experience much smoother for you. Plus, it’s at least $30 cheaper!

Home Cleaning Planet is a participant in the Amazon Services LLC Associates Program, an affiliate advertising program designed to provide a means for sites to earn advertising fees by advertising and linking to Amazon.com. Home cleaning Planet also participates in affiliate programs with, Clickbank, CJ, ShareASale, and other sites. We are compensated for referring traffic and business to these companies.

Rebecca Street
Professional Cleaner
Hey everyone! I am Rebecca, nice to meet you. I have a passion for cleaning homes and I decided to share my thoughts and reviews with everyone here. When I am not cleaning, I enjoy designing, exercising, and relaxing. I look forward to meeting all my readers.