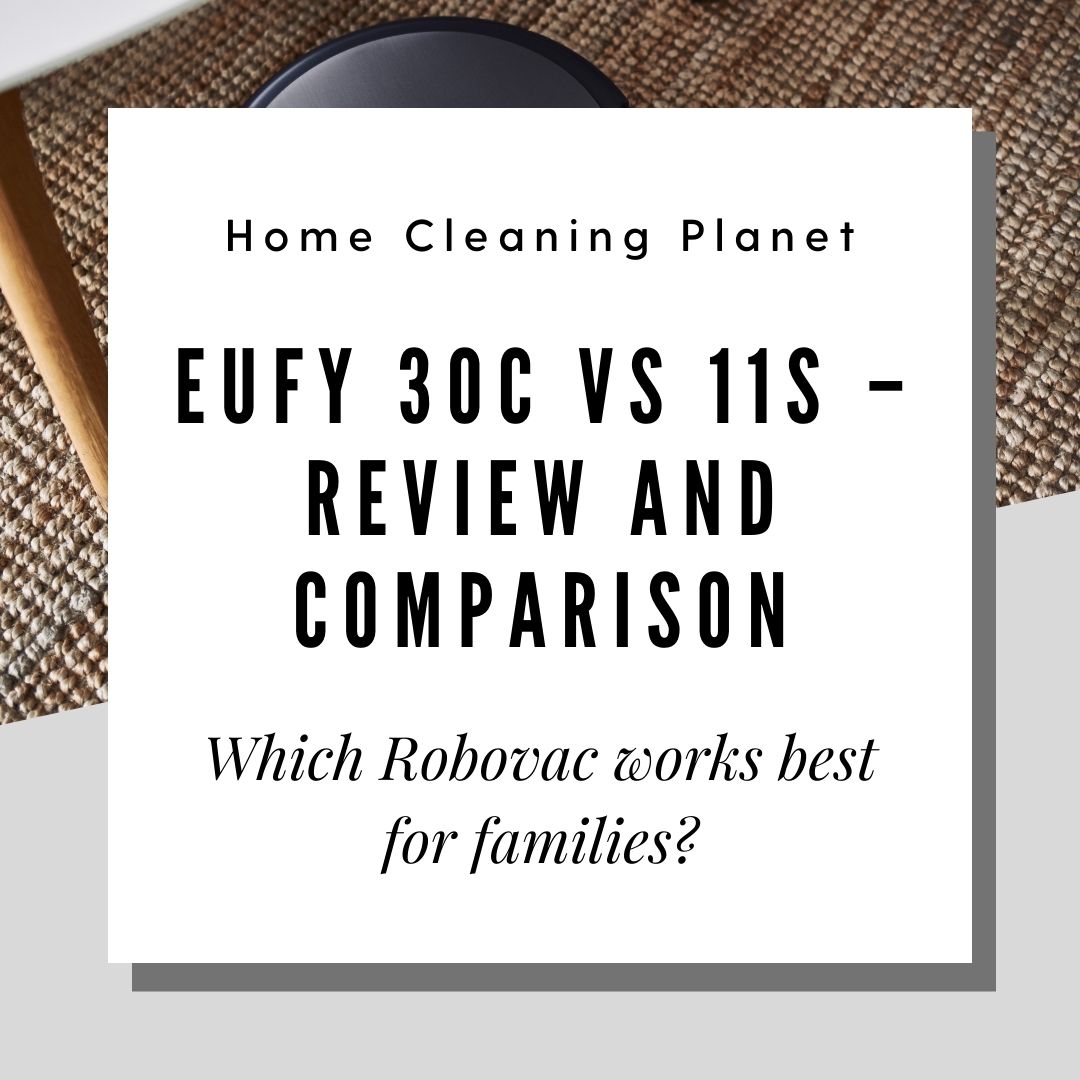 This page may contain affiliate links. When you click our links and take action, we get a small comission at no cost to you. Read here for more info

Eufy 30c vs 11s, what are the differences between these two impressive RoboVacs? Both models have comparable cleaning power, but one of these models has much more impressive technology, allowing it to clean and navigate more effectively.

Before we get into our comparison, we need to talk about Eufy. Eufy is a subsidiary of a Chinese-owned company called Anker Innovations. It mainly focuses on delivering smart appliances and voice control functions that are very well-integrated into their line of RoboVacs.

These devices are made so that you wouldn’t have to manually clean your home, and you can just sit on your couch and let it clean on its own.

Most RoboVacs have sensors that can detect any hindrances or furniture that block its path. It also has the full autonomy to clean whatever it thinks is dirt on the floor. With these, we will discuss two flagship RoboVacs from Eufy that you might be interested in investing in.

The Eufy 30C and Eufy 11S come in two very similar price points, and this article will go through all the unique features and put them against each other to help you see which one might be suitable for your lifestyle.

Now, lets get into our Eufy 30c vs 11s comparison.

When comparing suction power between Eufy 30c vs 11s, it will be measured by how much the machine can clean at once. That counts heaviness since it can move bigger objects, and the range is also much wider, which makes it cover much more space than others.

The Eufy 30C comes with an above-average suction power at 1500Pa, which makes it more selective in terms of what it cleans. For instance, only the area under the vacuum is moved, and any more powerful than that will affect the areas around it. And, even with this power, the vacuum still stays relatively quiet.

On the other hand, Eufy 11S has one of the best machines that Eufy offers. It has a 2000Pa suction power that can move heavier objects and cover more range: cleaning would take a lot less time.

And, Eufy has also created a quiet operating system for this vacuum, so you don’t have to worry about the power being too distracting. So, the choice here belongs to the Eufy 11S as it has a much greater machine while not having many let-downs with it.

Being Pet and Baby-Friendly

Since the suction power of the Eufy 11S is better, it can also handle thin hairs and fur. The Eufy 30C, on the other hand, cannot. So, if you have a pet at home that sheds its fur regularly, then you truly have to consider this feature.

Moreover, the Eufy 11S’s brushes were specifically made for thin particles. It also has a V-shaped design that makes it unlikely for hair to get stuck, which makes it infinitely easier to clean.

Both vacuums have additional filters, but the 11S also has an edge over the Eufy 30C since it has a unibody filter that is much more accessible and easier to maintain. This makes the air in your homes much safer for younger children. So, all things considered, the 11S truly is the better option for homes with pets and kids.

Eufy’s smart appliances and voice functions are integrated with only one of our options: the Eufy 30C. With this option, you can connect your phone to the Eufy 30C via an app, but this requires a stable WiFi connection. Here, you can control the movement of your RoboVac from your couch.

If you don’t have WiFi, you also wouldn’t miss out as the Eufy 30C also has voice functions that allow you to control it with speech. You can just talk to it directly, and its intelligent system can follow your words.

The other option, the Eufy 11S, does not have these smart functions. It does, however, still have an IR remote control that makes you manually control it like a toy car. You can adjust where the RoboVac cleans, which is still a great function.

Both sound good, but the Eufy 30C undoubtedly takes the win in terms of its technology and convenience. Also, considering that they’re at the same price point, you can get more of your money’s worth with the Eufy 30C.

Since these RoboVacs have their autonomy, they can literally go anywhere without your knowledge to clean the whole floor. Because of this, a lot of people actually lose their RoboVacs within the day since they usually get stuck in a corner or under a couch.

Because of this, Eufy has developed a software called “FindMe” that allows its users to get their RoboVacs to follow their phones. All you have to do is click a button from the app, and the vacuum can just find you by itself.

Unfortunately, this function is only available through the app, which means that only the Eufy 30C has it. If you want this extra feature, the Eufy 30C is definitely still the best option, especially as its technology is also so much better.

Does the Eufy 11s Have WiFi?

Since it doesn’t have a system that is compatible with Smart Connectivity, there is no need for Eufy 11S to have WiFi. The model that has it, however, is the Eufy 30C, which is well-known for having great technology that makes your experience convenient and safer.

In terms of technology, the Eufy 11S cannot even compare to Eufy 30C. But, if you’re considering overall experience and cleaning capabilities, the Eufy 11S is a lot better in terms of suction power and being animal and baby-friendly. It depends on what you prefer, but we highly suggest the 11S.

What Are the Main Differences Between Eufy 30c vs 11s?

The Eufy 30’s technology is really the most significant difference between both vacuums, but it is still important to consider that the 11S has a higher suction power that really brings the whole cleaning experience to the next level.

Eufy 30c vs 11s: Which Is Better for Carpeted Floors?

The Eufy 30C is generally better for carpeted and bare floors. Since carpets have a particular texture that makes dirt stick to them better, the Eufy 30C has to be used at higher power with at least 1500Pa. While cleaning bare floors, you can keep it at 1000Pa.

It really depends on what you prioritize as they both have their very distinct strengths, but considering that the 11S is much better for pets and kids, it is much more versatile and sustainable in the long run. Also, since it is easier to clean, the maintenance is not that time-consuming.

So, even if Eufy 30C has better technology, Eufy 11S still takes the crown because of these reasons.

Home Cleaning Planet is a participant in the Amazon Services LLC Associates Program, an affiliate advertising program designed to provide a means for sites to earn advertising fees by advertising and linking to Amazon.com. Home cleaning Planet also participates in affiliate programs with, Clickbank, CJ, ShareASale, and other sites. We are compensated for referring traffic and business to these companies.

Rebecca Street
Professional Cleaner
Hey everyone! I am Rebecca, nice to meet you. I have a passion for cleaning homes and I decided to share my thoughts and reviews with everyone here. When I am not cleaning, I enjoy designing, exercising, and relaxing. I look forward to meeting all my readers.
Learn More
Contacts:
(604) 674-9376
[email protected]

“Empowering you to keep your home clean, organized, and healthy”